Decision Making When it Comes to Kids, Pets, and Your Home

Despite the challenges and sacrifices of being a parent, raising children has plenty of advantages. In addition to the love and important life lessons that come with caring for another human, research suggests you may even live longer when you have children.

Similarly, pets can provide unconditional companionship, opportunities for exercise, and a major buffer against stress. Not to mention all of the cute photo opportunities you’ll capture along the way.

For some families, kids and pets go hand in hand. Both fall into consideration when buying a home, choosing where to work, and choosing the right daycare. But what if you had to pick one? What if you could have children at home, but no pet? Or the reverse—as many pets as you want, but no children? How would those choices impact your home and relationships? With those questions in mind, we surveyed over 1,000 people about their preference for children or pets.

Possibly due to the cost of living, a desire to focus on relationships or careers, or finding fulfillment elsewhere, the average birth rate in the U.S. continues to decline. 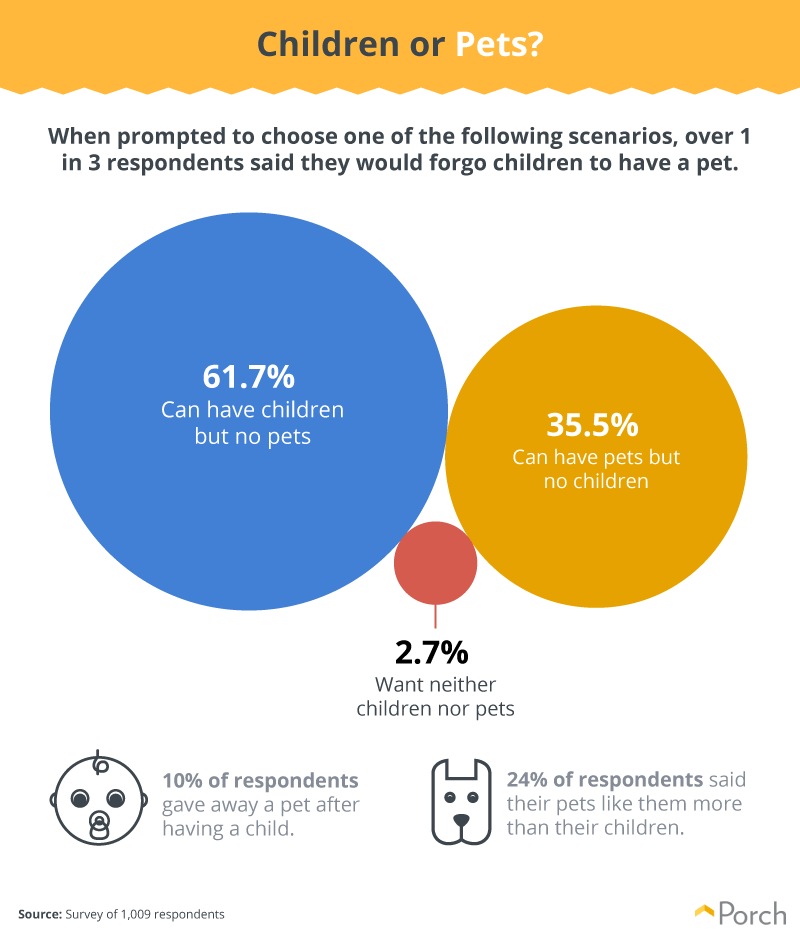 When asked to make a hypothetical decision between having kids or owning pets, nearly 1 in 3 respondents chose to have as many pets as they wanted but never have children. In addition to the nearly 3 percent of people who didn’t want children or pets, roughly 62 percent opted for a future with children that could never include a pet.

However, nearly 1 in 4 people with both furry and human children confessed their pets liked them more than their children, while 1 in 10 parents admitted to giving away a pet after having a child.

There’s plenty to think about when you’re buying a home. In addition to the overall cost and monthly mortgage payments, you should consider your professional aspirations, commute time, and the amount of space you might need in the future. 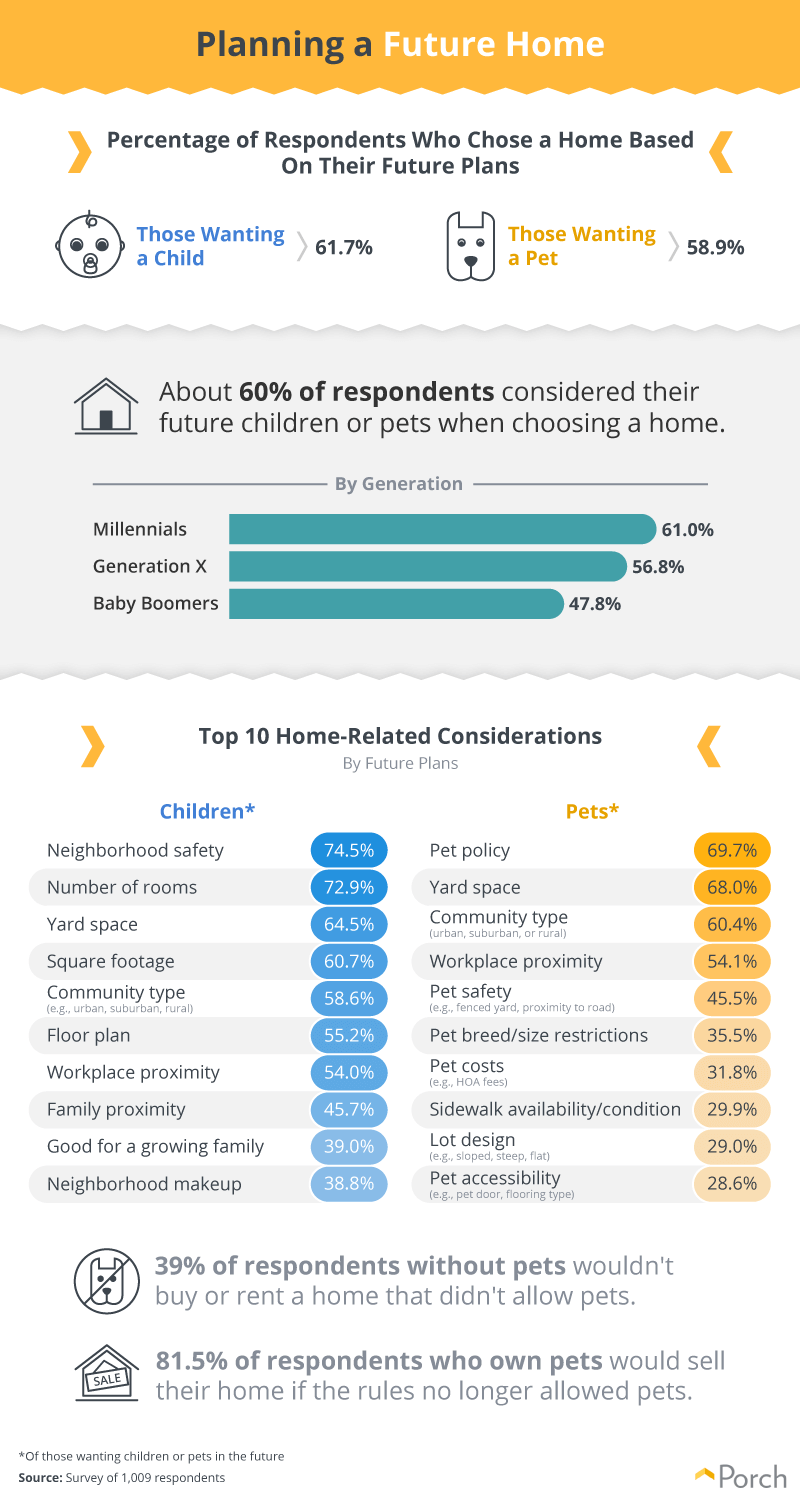 Whether you’re a pet parent or a human parent, your “children” are an important consideration in the homebuying process, as well. Almost 62 percent of people wanting children would choose a home based on their future plans. Those wanting a pet had a similar perspective, with 59 percent choosing a home based on their plans. Meanwhile, millennials (61 percent) were more likely than Gen Xers (57 percent) and baby boomers (about 48 percent) to consider their future family or pets when choosing a home.

Additionally, nearly 40 percent of people without pets wouldn’t buy or rent a home that didn’t allow pets. And more than 4 in 5 respondents with pets would sell their homes if the rules allowing pets changed.

If you’re committed to loving the home you’re in, you might renovate to accommodate your growing family. 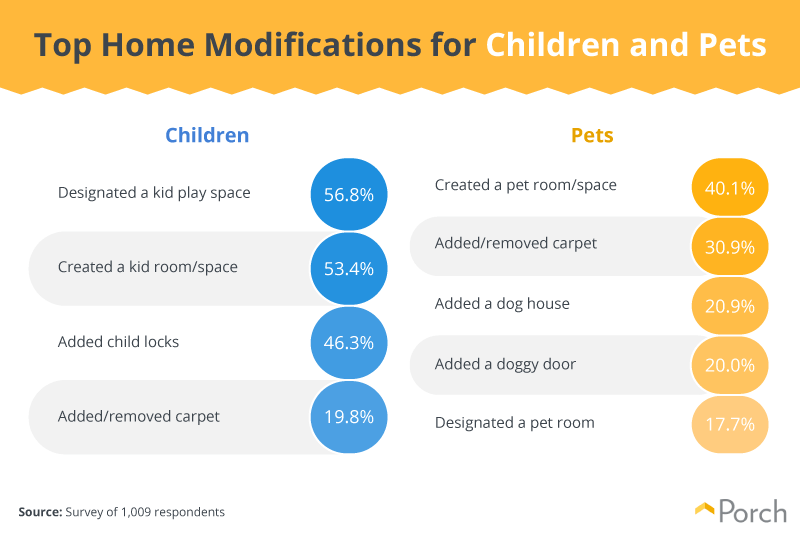 Some experts argue against a dedicated playroom, however. Dedicated rooms can mean more places for toys to be stashed and forgotten, isolation, and missed opportunities for more functional spaces (like an art studio or gym).

Having an extended family, of any variety, doesn’t just impact your life at home. From the time you take off to recover from childbirth to the attitude toward children at work, becoming a parent can be a rollercoaster ride professionally speaking. 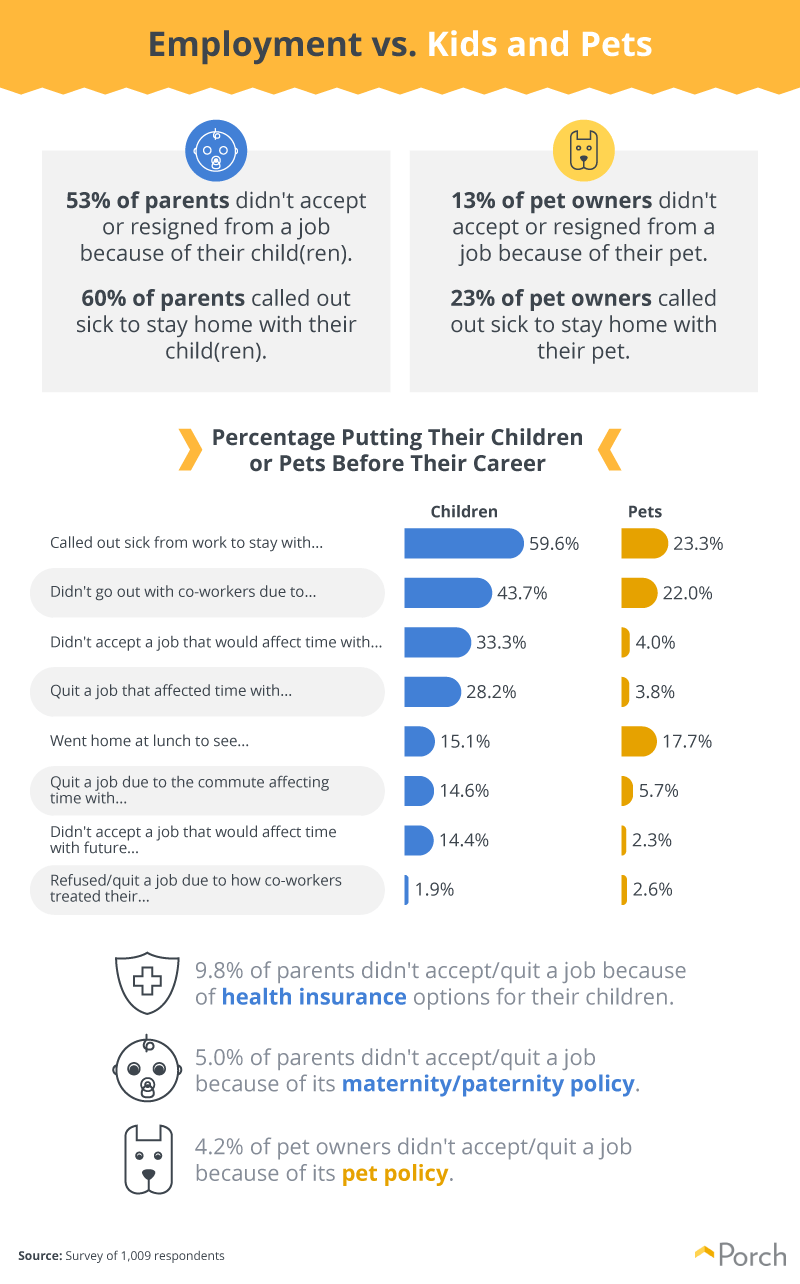 Not every relationship will work out. Sometimes, people just aren’t compatible or discover they want different things in life. For some couples, that includes how their spouse or partner treats their pets. 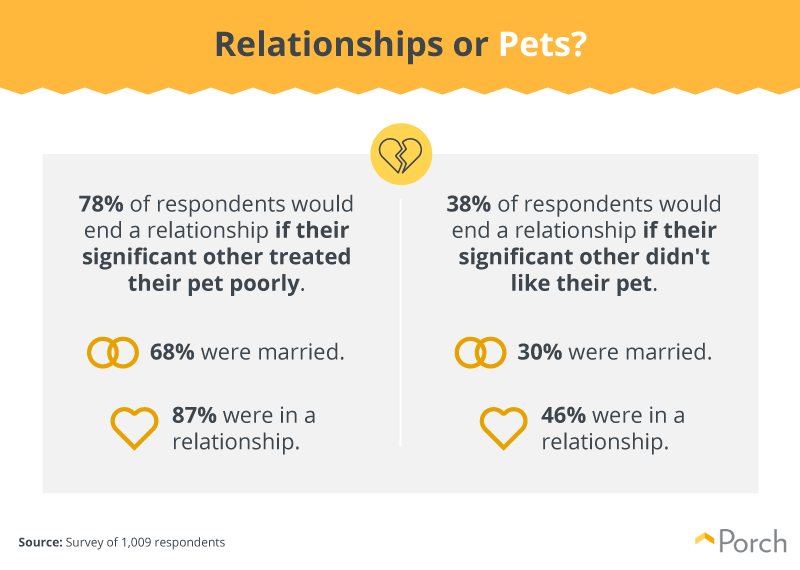 Even though they can’t tell you they love you back or thank you for everything you do for them, 91 percent of people believed their pet is family, with 29 percent of people saying they’d spend their life savings to save a pet’s life, and 41 percent preferring a pet than a best friend. 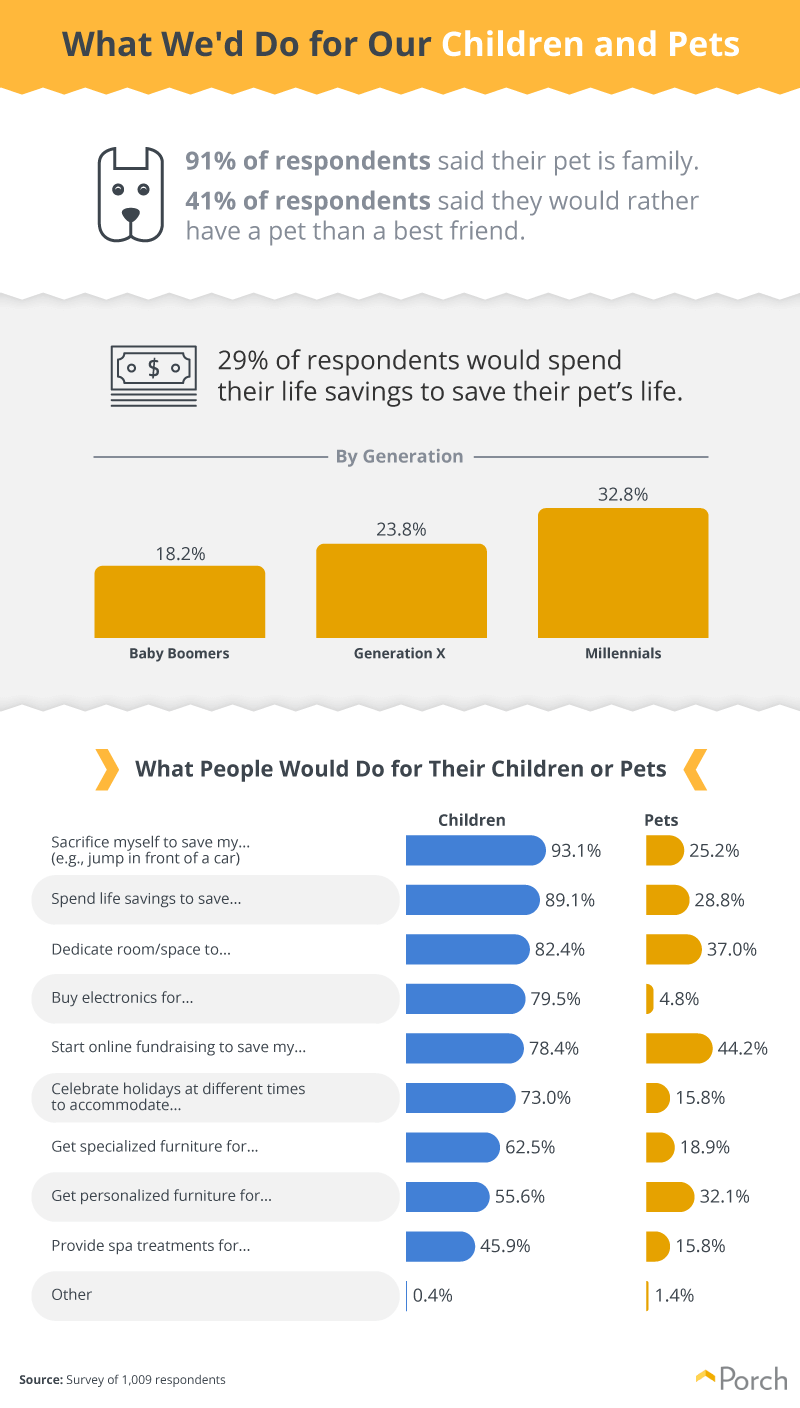 So how far will people go for their families—human and animal alike? Forty-four percent of pet parents would start an online fundraiser to save their animals, while 37 percent would dedicate an entire room or section of the house to their pets, and 32 percent would get their pet personalized furniture.

In contrast, 93 percent of parents said they would sacrifice themselves to save their children, and 89 percent would spend their life savings if necessary. More than 4 in 5 parents would dedicate an entire room or section of their house to their children, followed by those willing to buy electronics for their children.

In the real world, you typically don’t have to decide between kids and pets. Still, you may decide that you’re more inclined toward one over the other and make sacrifices for your family—furry or not. While it was more common for parents of children to dedicate money, space, and even their job to their family, some pet parents were willing to go just as far. Proving that pets can become part of the family just as much as children.

At Porch, we want your home to work for your family, no matter what your family looks like. Whether that means moving into a new space or finding ways to modify the home you’re in, Porch is your pro for everyday home projects. With instant booking and our satisfaction promise, we know you’ll love the work we do. Learn more by visiting Porch and book a professional in your area today.

For this project, we surveyed 1,009 respondents through Amazon’s Mechanical Turk survey platform. Survey respondents were aged 18 to 80, with a median age of 39.

Respondents by pets or children:

Limitations: There are many problems with self-reported surveys. Some of these issues include but are not limited to selective memory, exaggeration, and or lying. To account for this, respondents who did not correctly answer an attention-check question were excluded from the results.

Porch makes moving, insurance, and improving your home and everything in between simple.

or email us at admin@dogdrop.co